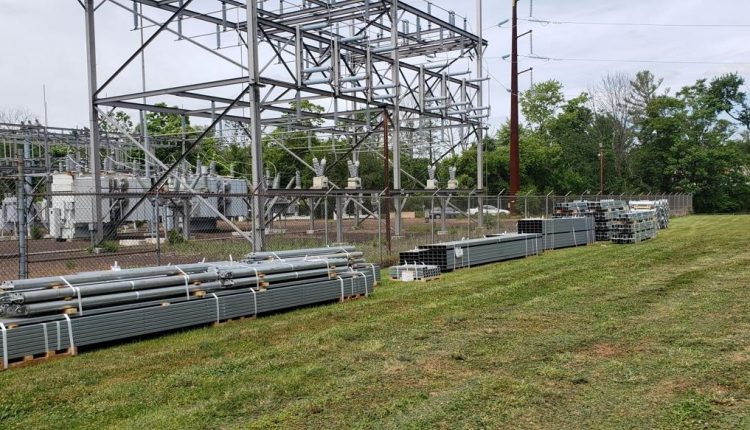 LANSDALE — The newest evidence that Lansdale is going green has arrived.

“I’m happy to report that, after what seems like a really long period of time, this week we started to take delivery of all of the pieces and components to our solar project down at the wastewater treatment plant,” Ernst said.

Since early 2018 the borough has discussed a project to install solar panel systems at the wastewater treatment plant and electric department complex on Ninth Street, and a separate system atop borough hall on Vine Street. In February 2018 the borough applied for state grant money for the project, received those grants in April 2018, and by last summer staff said designs had been finalized and would be bid out with installation possible early this year. In March staff said the contracts had been awarded in December to two separate firms, to BSI Inc. for the utility complex and to Spotts Brothers Inc. for the borough hall project, and at that time the borough estimated the borough hall project would be done by July and the municipal complex done by October 2020.

Ernst reported Wednesday night on the latest development, the equipment that has now been delivered to the municipal complex, which when activated will be the first locally generated public electricity since a borough-run power plant near Third Street and Richardson Avenue was shut down in the late 1960s. In a post Thursday the Electric Department said the municipal complex system will contain over 1,000 solar panels installed on 26 azimuth tracking setups that will follow the sun across the sky, and the first equipment to arrive was stands with panels themselves slated to arrive shortly.

“Construction and layout has begun, different parts and accessories are starting to show up, and we’re looking forward to having that project break ground, and start moving forward, so that we can start drawing some electricity off of that project,” Ernst said.

For more information on Lansdale’s Electric department, visit www.Lansdale.org or search for “Lansdale Electric” on Facebook.

How A lot Do Solar Methods Actually Price In 2020? Solar Panel Costs Sydney