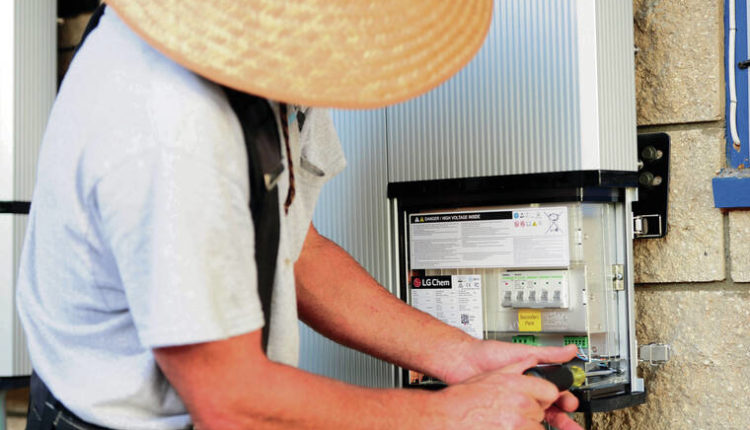 Mahalo for helping Honolulu Star Advertisers. Have fun with this free story!

Hawaii's power grids are about to be hooked up for reciprocal integration with battery storage systems in households across the state.

A company began accepting applications Thursday from Hawaiian Electric customers interested in earning fees for existing and new rooftop solar system batteries to help fuel supply and demand in Oahu, Maui and the island of Hawaii to modulate.

Essentially, a residential customer's battery could be used to draw excess renewable energy from the utility to keep a grid from becoming overloaded, or tapped as a power source when a grid needs more supply.

The goal of the program, which was approved by the state's Public Utilities Commission in January, is to transform grids of solar battery systems on the roof of customers into manageable energy banks for Hawaiian Electric grids, where power generation and consumption must be balanced.

Too much electricity generated, especially from wind and solar energy during the day, when electricity consumption is lower, can disrupt a grid. On the other hand, peak energy needs must be met in the evening after sunset.

“Our islands have small island grids with a high proportion of renewable energy, which makes them prone to supply and demand imbalances,” Yoh Kawanami, Hawaiian
Customer electrical energy
Resources co-director said in a statement earlier this year announcing approval of the deal with Swell.

The state's largest regulated energy company believes it will need many more customers and independent companies in the next 20 years to participate in Hawaii's growing future of clean energy with their own generation, storage and participation in such “grid service” partnerships Managed by third-party technologies, contractors such as Swell will participate.

Last month, Hawaiian Electric launched a call for proposals from network service providers to aggregate what it calls "customer
distributed energy resources "of up to 60 megawatts under a 10-year management contract, similar to what Swell started.

Swell's program is designed for up to 80 megawatts, which corresponds to approximately 4,000 residential battery systems on Oahu, 1,500 on the island of Hawaii and 500 on Maui.

The company is initially working with installation partners RevoluSun on Oahu and Rising Sun Solar on Maui and the island of Hawaii, but expects to add more.

As part of the Swell program, participants earn a fixed monthly fee based on battery capacity.

Swell expects this monthly fee to average around $ 40 for a typical self-contained battery, with each additional battery adding $ 40 per month per battery to the payment. Such a payment would appear as a credit on a customer's utility bill, with excess credit being paid out in cash.

Suleman Khan, CEO of Swell, said the energy management system is designed to prioritize power value for the battery owner while providing flexibility to the grid.

“It really breaks the glass ceiling of renewable energy,” he said.

Swell's contract runs for a period of five years and is expected to cost utility payers
$ 25 million to pay for program participants and swell.

Kawanami said in a statement Thursday that Hawaiian Electric customers can now get more value from battery systems with grid utilities like Swell's.

"We are at a turning point in Hawaii in advancing the capabilities of all residential and future solar and residential batteries," he said. "By harnessing the collective energy in our homes, we are enabling a more affordable and resilient Hawaii that will also help us meet our 100% renewable energy goals by 2045 or sooner."

Some of the near-term efforts to use residential rooftop solar battery systems for power management on Oahu are being driven by the need to avoid a potential bottleneck when a coal-fired power plant is now owned by AES Corp.

This 180-megawatt system in the Campbell Industrial Park supplies around 16% of the
Oahu's stream during peak evening hours.

Another company that has signed a contract with Hawaiian Electric to aggregate so-called customer energy resources is Open Access Technology Inc., which has worked with Sunrun, a solar energy provider.
on a program similar to Swell.

Hawaiian Electric also launched its own program in July to encourage customers to add batteries to rooftop solar panels. This program, called “Battery Bonus”, offers customers a one-time payment of between $ 500 and $ 850 per kilowatt of new battery storage so the utility can ensure that the battery system provides power to the home or grid for two hours during peak hours. Time of use from 6 p.m. to 8.30 p.m. over 10 years.

The utility's program aims to add up to 50 megawatts of battery storage and provide customers with up to $ 34 million in incentive payments, paid by utility fee payers.